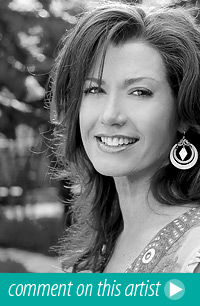 For every road that has ever been walked, there was always a first. There was always one that went before—discovering, cultivating, falling and rising once again to pave a path for others to follow.

And in 1977 when the world heard the first strains from a young teenager’s self-titled debut, Amy Grant began a journey unlike any ever had, and arguably, ever will traverse.

Her accolades alone are more than enough to solidify Amy’s iconic status. But more than record sales (of which there have been over 30 million worldwide), more than celebrity, Amy Grant was truly the first to break down the walls between artist and audience. Through her songs, we’ve heard her joy, her questions, her pain and her humor. We’ve seen her succeed. We’ve seen her bleed. She has been lauded and she has been ostracized.

"But with the sweet, came the bitter. As the world got to know Grant more and more, she allowed everyone to see that she was human."

She has been a contemporary Christian, living, stumbling and soaring through a modern generation, while making music that will influence countless generations to come.

She is what Contemporary Christian music is all about.

One of a kind, bold, passionate and honest—she is a classic.

And from that 1977 debut to her 2010 album, appropriately titled Somewhere Down the Road, she has offered companionship, sympathy, encouragement and empathy. She’s been more than an icon. She’s been our friend.

Born in Augusta, Georgia, Grant moved to Nashville with her family when she was young. Turns out, her coming-of-age locale proved to be quite advantageous when she started writing songs at the age of 15. As so often happens in that small music city, a tape that she made for her parents fell into the right hands—Chris Christian—and soon she was offered a contract with Word Records.

With a fortuitous combination of financial backing (from her father), endearing vocals and writing, her first album, certified Gold, sold an impressive 50,000 units. She followed it up with My Father’s Eyes in 1979, which also achieved Gold status. But it was her 1982 record that truly set her in a league all her own. Age to Age, which included “Sing Your Praise to the Lord” (written by Rich Mullins) and “El Shaddai” (written by Michael Card) has been tagged one of the greatest Christian albums of all time and the first Christian album to go Platinum.

Soon, Amy’s reach was extended beyond a single genre. With appearances on “The Tonight Show” and ratings on the Adult Contemporary charts, her crossover appeal was becoming increasingly evident. Soon enough, she wasn’t just a Christian music favorite; secular audiences were responding and opening the door wider and wider for the increasingly business-savvy Grant.

But with the sweet, came the bitter. As the world got to know Grant more and more, she allowed everyone to see that she was human. She had desires, dreams, passions, regrets and mistakes just like the rest of us. However, as the first lady of Christian music, her critics came forth with pointed accusations regarding her lifestyle, appearance and use of her image to sell albums.

Her critics were muted somewhat, at least when it came to her spiritual convictions, with the release of the 1988 record, Lead Me On. With lyrics revealing a much more mature and even wounded Grant, the album is still considered her finest work by many.

Shortly thereafter, she followed the serious turn with fun, pop-sounding records that didn’t contain nearly the depth of the previous, but launched her to the height of her popularity. (Heart in Motion, released in 1991 sold six million copies.)

In 1997, however, her album Behind the Eyes returned with the depth of Lead Me On and heart-wrenching transparency that revealed much more than a songwriter returning to her roots. Songs laced with internal struggle revealed much more than a Christian artist—they revealed a woman torn by love, seeking resolution and wrought by indecision. Perhaps not surprisingly to many, two years later, after 17 years of marriage, Grant and her husband Gary Chapman divorced, citing irreconcilable differences. There was talk of substance abuse on Gary’s behalf and at least an emotional affair on Grant’s. In March of 2000, the rumored relationship between Amy and country singer Vince Gill was solidified in marriage.

Since then, Amy has continued to make the music she is known and loved for—thoughtful and honest. She is committed to her children, her marriage and her community, often appearing on behalf of charities and philanthropic causes.

In 2010, she released a new album with a title that has likely evolved in meaning over the years—Somewhere Down the Road. The album features originals that play to Grant’s straightforward and honest songwriting, as well as a duet with her daughter. The standout single, “Better Than a Hallelujah” served to remind us all why she is the legend that she is.

Never one to hide the truth, run from controversy or short change the power of God to produce beauty out of brokenness, Amy is today all at once very different than she was with her debut record, and in some ways, the same. She’s the girl next door who knows how to say things just the right way…she’s the woman who believes in love, and can survive love gone wrong. At home in any crowd, she is and will always be the name and the face of Christian music. As the genre itself has plodded along a road of twists and turns, trials and triumphs, there will always be those who led the way. And a standout above them all—through highs and lows, win and losses, she is and will forever be the first.