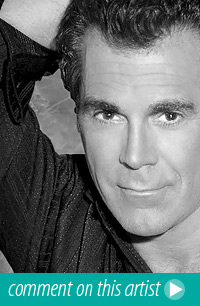 "Carman has received 15 gold and platinum albums and videos, and has sold over 10 million records. He holds the world record for the largest solo Christian Concerts in history with 80,000 attendees"

While attending an Andraé Crouch concert, Carman became a born again Christian, and embraced evangelicalism.  In 1980, he made a custom album titled God's Not Finished with Me.  The following year he was invited by Bill Gaither to tour with The Bill Gaither Trio. After relocating to Tulsa, Oklahoma, he released a moderately successful eponymous debut album, later issued as Some-o-Dat in 1982, which contained mostly novelty songs.  Then with the release of the live album Sunday's On The Way in 1983, he began a string of CCM chart successes beginning with the title song.  As he continued his musical career, Carman established the non-profit organization Carman Ministries.  With the 1985 release of The Champion, came his first number one song of the same name.  Another live album, Radically Saved, came in 1988.  Then 1989 brought Carman his first number one album—Revival in the Land.

Between 1987 and 1989, he was named Charisma magazine's readers' choice for favorite male vocalist.    In 1990 and 1992, Billboard Magazine recognized Carman's influence in Christian music by naming him the Contemporary Christian Artist of the Year, and in 1995 he recorded his first album in Spanish, Lo Mejor, which includes some of the already recorded songs like Who's in the House and The River.  In 2000 the album Heart of a Champion came out with 30 of his best songs, also included were some new songs.  In 2007 he updated his catalog with Instrument Of Praise, which saw him exploring the new musical styles of the time.

He has received 15 gold and platinum albums, and videos and has sold over 10 million units.  He holds the world record for the largest solo Christian Concerts in history with 80,000 attendees for a Charlotte, North Carolina show, 71,132 for an indoor show at Texas Stadium, and the largest ticketed CCM solo concert with 50,000 in Johannesburg, South Africa.

Beyond music, he participates in various television productions, and an interview host for both the Trinity Broadcasting Network in general and the flagship program "Praise the Lord".  In 2001 Carman starred in the film " Carman The Champion".

Recently, Carman was diagnosed with cancer.  The musician and evangelist wrote on his Facebook page Thursday morning:  “I have delayed writing this but those of you I call friends and supporters, who have prayed for me and this ministry need to know about this new battle that lies ahead.  One week ago I was diagnosed with myeloma cancer.  It is incurable and I've been given a 3- to 4-year window of time.  ”Often described as part evangelist, part Vegas showman, the 57-year-old's concerts “are more like a rock-and-roll Billy Graham crusade than a Christian music event,” his website says.  Carman wrote that he will go in for his first bone biopsy and begin the process this week. “I used to go to movies in the afternoon, now I go see doctors,” he said.  The singer listed three reasons for his Facebook post:  “First, I want to put an end to all the rumors.  Second, I ask for your prayers.  And 3rd, I want you all to know that I will continue to minister and win souls until I can't do it any longer. “My life has always been about ministry,” he explained.  “I have a call of God to touch lives with the gospel of Jesus Christ and that's what I will do until the Lord calls me home.  ”He asked his Facebook followers not to fill his page with cancer treatment remedies, but encouraged them to come see him the next time he's in their area. “Bring someone who doesn't know the Lord or who needs to be healed,” he wrote.  “I will always pray for the sick and I'm also going to step up the intensity of my message at these events.  I will not leave this world quietly and I want the devil to know that he put cancer on absolutely the wrong Italian.  “I have a few good years and before it's too late I want to see your faces, shake your hands and hug your necks.  But mostly I want to see one of you get healed of what threatens your future and I really want to see someone you love come to Christ.  Now lets get back to business...we have to work while it's day for soon the night comes,” he concluded.

Grammy Nominations:  Album of the Year: Long Time Ago... In a Land Called Bethlehem Record of the Year:  "Addicted To Jesus" Pop/Contemporary Christian Album: Mission 3:16