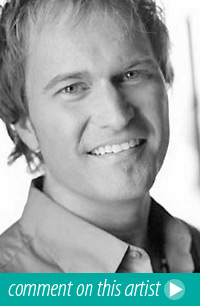 Clay Crosse was born Walter Clayton Crossnoe, February 11, 1967. Clay is a contemporary Christian music artist who has won four GMA Dove Awards, and is probably best known for the song "I Surrender All."

Clay Crosse has won four GMA Dove Awards, and is probably best known for the single, " I Surrender All"

Clay Crosse grew up in Memphis, Tennessee, and became a Christian at the age of 13.  He married his high school sweetheart, Renee.  Initially Clay worked as a courier for FedEx for six years.  Clay released his first album, "My Place Is With You", in 1995.  "I Surrender All" was the most successful single from the album.  With the success of his musical career, Clay quit his job.

Crosse became known for singles such as "I Surrender All" and "My Place Is With You".  He won the Dove Award for "Best New Artist of the Year" at the 25th GMA Dove Awards in 1994...Clay's music has a pop style.  Eight songs from his first four albums became No. 1 singles. During this period, his "He Walked A Mile" won the 1997 CCM Adult Contemporary Song of the Year.  In 1998 his song "Sold Out Believer" reached No.15 on the Christian music charts.  He also collaborated with Bob Carlisle and BeBe Winans on "I Will Follow Christ".

Following a personal struggle with pornography, Crosse lost his voice.  Reportedly, he was not sick but he was unable to sing.  A vocal coach he hired to help him questioned him about his personal life.  After praying with the coach one day, Crosse confessed his struggles to his wife.  It took one year for his relationship with his wife to improve.  Later, Clay stated that he was able to sing, although not as well as before.  With the changes in his personal life, Clay released "A Different Man" in 1999. The songs "98", "Sinner's Prayer" and "Arms of Jesus" were written reflecting his personal struggles.  Touring with Jaci Velasquez, he spoke to teenagers on sexual abstinence before marriage.  The two singers worked in conjunction with the national student movement, True Love Waits to promote sexual purity.

After the release of "Christmas with Clay Crosse", Clay served as worship pastor for The Love of Christ (TLC) Community Church in Memphis under head pastor Dana Key (of the Christian Rock group DeGarmo and Key).  During this time, the release of a live worship album was conceptualized.  Clay signed a deal with the TAG Artist Group to release the CD and DVD "Eternity with You Live Worship".  The release of the CD and DVD coincided with the publication of his book, "I Surrender All". In 2007, he released the single "Believe".