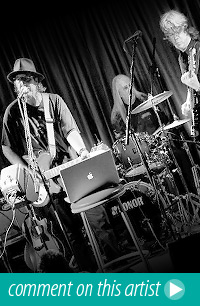 “Daniel Amos is an American rock band formed in 1974 by Terry Scott Taylor. Over the band's career, they have experimented with country rock, rock, New Wave, and alternative rock.”

The roots of Daniel Amos began to grow out of Jubal's Last Band, an acoustic quartet consisting of Taylor, Kenny Paxton, Chuck Starnes and Steve Baxter who spent their time performing for Bible study groups and at coffee shops throughout Southern California.  In 1974, JLB recorded a demo tape together and eventually lost Starnes and Paxton. Bassist Marty Dieckmeyer and guitarist Jerry Chamberlain were brought in to fill the empty spots.  Sometime in the middle of 1975, Jubal's Last Band (minus Baxter) auditioned for Maranatha Music and Calvary Chapel in hopes of signing a recording and performance contract.  Another band at the meeting, led by Darrell Mansfield, had a similar name – Jubal.  The two bands decided to change their names to avoid confusion. Mansfield renamed his band Gentle Faith (taken from the name of co-band member Henry Cutrona's earlier band), and Jubal's Last Band became Daniel Amos.

Daniel Amos succeeded in landing a recording and performance contract and quickly recorded their first song for the label in 1975, Taylor's "Ain't Gonna Fight It," released later that year on the label's compilation album Maranantha.  The band released their first full length, eponymous album (Daniel Amos) in 1976 which was produced by dobro player and producer Al Perkins (Rolling Stones, Bob Dylan, Roy Orbison, Joe Walsh, the Flying Burrito Brothers, etc.).  Soon after the release of that album, DA enlisted Ed McTaggart as their full-time drummer. Previously, McTaggart had been the drummer for Bill Sprouse Jr.'s The Road Home.

Although Horrendous Disc was recorded for Maranatha Music, the label ended up dropping it because of a major change in the focus of the label.  The label decided to stop releasing albums by rock and roll acts and wanted to focus on praise music.  The band shopped the new record around to several labels, including Warner Brothers, but settled on Larry Norman's Solid Rock Records. Solid Rock ended up delaying the release for nearly three years and the album was not seen on record store shelves until a week before the release of the band's newly recorded fourth album Alarma in 1981.  The long delay led to the departure of MacDougall and Cook, and was the subject of a series of articles and letters to the editor in CCM Magazine.

Alarma was the first of a four part series of albums entitled The Alarma Chronicles, which also included the albums Doppelgänger, Vox Humana, and Fearful Symmetry.  On the tour that followed each release, the band used a full multimedia event complete with video screens synchronized to the music.   The stage setup also included mannequins, a 3D slide show and actors portraying game show announcers and models for the song "New Car!"  By the end of the four part album series, new band members Tim Chandler and Greg Flesch joined the band to fill vacant positions previously held by Dieckmeyer and Chamberlain. Keyboardist Rob Watson would also occasionally join the band in the studio or on the road. In 2000, the band released the four individual Alarma Chronicles albums in a three-disc set packaged together with a booklet collectively titled, The Alarma Chronicles.  Additional material was provided by columnists John Thompson, Bruce Brown, Randy Layton, Brian Quincy Newcomb and others.

The band released Darn Floor-Big Bite in 1987. Although Darn Floor was an artistically ambitious and critically acclaimed effort, it sold poorly. In the late 1980s, many of the band members became The Swirling Eddies for a string of releases through the early 1990s. In 1990, D.A. would form their own independent record label, Stunt Records, with help from friend Tom Gulotta. One of the first albums released by Stunt was the half comedy, half rarities and best of compilation from Dr. Edward Daniel Taylor, The Miracle Faith Prickly Heat Telethon of Love. Over the years that followed, Stunt became the primary source for new DA material, including the live albums, Live Bootleg '82 and Preachers from Outer Space!. Jason and Eric Townsend, producers of the DA Tribute CD When Worlds Collide, would join the Stunt Records organization in 2000 to help with promotion and production work.

In addition to recording several albums as The Swirling Eddies, the members of DA returned in 1991 with Kalhöun. 1993's MotorCycle followed, which also marked the return of Chamberlain, who would hang around long enough for two additional DA releases in the 1990s, BibleLand in 1994 and Songs of the Heart in 1995. Songs of the Heart was a concept album that followed the fictional couple, Bud & Irma Ackendorf, on a trip down the historic U.S. Route 66.   The concept was explored in greater detail in the 2002 three-CD "book set" entitled When Everyone Wore Hats.   That collection not only included the entire 1995 album, but also the entire album reworked as an acoustic band, three new songs, an interview of Taylor by Starflyer 59's Jason Martin, photos, expanded liner notes and a newly written short story by Taylor. In 1994, DA joined artists like Randy Stonehill, The Choir, Bruce Cockburn, Victoria Williams, Kate Taylor, Debbie Boone, Chagall Guevara, Carolyn Arends, and others to record songs for Orphans of God, a double disc release that paid tributed to singer/songwriter Mark Heard, who died in 1992 following a performance at the Cornerstone Festival.

In mid-1999, a number of artists joined together to contribute to a tribute album entitled When Worlds Collide: A Tribute to Daniel Amos. Artists lending their voices (and guitars) to the project included longtime band friends like Randy Stonehill, Jimmy Abegg, Phil Madeira, Starflyer 59, Brian Healy, and others.  Also making a surprise appearance on the project was Larry Norman, who had not worked with the band since the delays surrounding the Horrendous Disc album. The tribute album was released in time for Cornerstone 2000.

In 2001, DA released what many critics called their best album to date, Mr Buechner's Dream, named after author Frederick Buechner.  The album also pays tribute to Walker Percy, T. S. Eliot, G. K. Chesterton, Flannery O'Connor, Lewis Carroll, Dorothy L. Sayers, and other authors that have inspired DA's lyrics for years.  The album was released on Stunt Records.  The band had such a creative time in the studio that they ended up with more than 30 brand new songs to include on the new album.

In 2010 the band's official website announced plans to release a new Daniel Amos studio album in 2011.  The band will also be performing some concerts in 2011, including an appearance at Cornerstone Festival.  The band's website also announced that Deluxe Editions of their debut album, Shotgun Angel and Mr. Buechner's Dream would be released in June in time for the band's tour.  The Deluxe Edition of Shotgun Angel premiered at the band's first 2011 show in Nashville, TN.  The Deluxe Mr Buechner's Dream premiered at the band's June 18, 2011 show in Wilmington, OH.

In late 2012, Daniel Amos launched a Kickstarter campaign to fund the production of a new album.  The album is planned to feature the lineup of Taylor, Flesch, Chandler and McTaggart with earlier band members Jerry Chamberlain and Rob Watson.   By February 2013, recording sessions began in Nashville, TN., at Brown Owl Studios.  The album, Dig Here Said the Angel, was released in July of 2013 simultaneously with a remastered two-CD deluxe edition of the bands Alarma album.