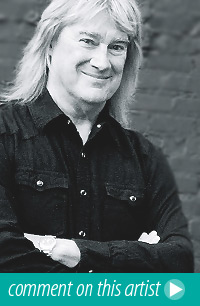 John Schlitt : then and now...

With more than three decades worth of water under the musical bridge, John Schlitt has seen just about everything the industry has to offer from both the mainstream and the Christian side – the good, the bad and the ugly. He’s earned multiple Gold Records, GRAMMYs and Dove Awards. He’s toured all over the world and has been inducted into the Gospel Music Hall of Fame as the lead singer of Petra, one of the most successful Christian rock bands of all time. He is a man who has ridden the rock ‘n roll lifestyle to the depths of depression, felt the healing and restoring hand of God lift him from the mire and lived to sing about it.  He is a man who has something to say and has earned the right to say it.

"Schlitt officially joined Petra in 1986, bringing with him his amazing vocal range and abilities that made him a legend."

John began singing when he was just five years old, performing the leads in recitals and plays in school.  By the time he was 13 he was in a band - being paid $25 as lead singer.  It soon became clear that a career in music was in John’s future.  He finished college with a degree in civil engineering and promptly set about making a name for himself in the world of rock ‘n roll.  His unique, fiery tenor and unbridled passion for singing landed him a gig fronting the legendary rock band Head East.

John’s eight-year stint with Head East put him on the map in terms of his career – the band was celebrated for its raw energy and swagger.  Described by one newspaper as a "brash…cocky, (and) hard-fisted rock band,” the five-piece group enjoyed a loyal following and a string of hits throughout the ‘70s that helped solidify their fan base.  John’s career seemed set but it all came to a distressing end in 1980 when he was let go by the band.  The reason: John had an out-of-control drug and alcohol addiction.

Poised for a long and fruitful career in music, John was suddenly an abject failure, another casualty of rock ‘n roll decadence, rejected by his peers and left to his own drug-influenced devices.

Little did he realize that God was already hard at work in changing his life.  As John battled his inner demons, God began working on his wife Dorla, who met the Lord as John continued his descent into despair.  John’s initial reaction to the Gospel was one of distaste, fighting the Holy Spirit’s beckoning every step of the way.  In his mind, suicide was the only way out of the downward spiral that had so engulfed his life.

Through the witness of his wife and her pastor one intense evening, John accepted Christ as Savior and friend, letting go of the addictions that held him captive for so many years. "I got hit with a boldness about Jesus that I've never known before," John recalls in awe.  "I was saved that night, and it was a new beginning for me.  I didn't feel that burden of guilt anymore; I had a new chance."

He resolved to live for God and even forsake music, if that was what God ordered.  John ended up looking for practical work to support his family, starting from scratch by sweeping floors.

But God wasn’t done with him musically.  In fact, it turned out that John’s days in Head East were a precursor to something even greater.  Five years after firmly putting music behind him, God called John back to fronting the Christian rock band Petra.

John officially joined Petra in 1986, bringing with him his amazing vocal range and abilities that made him a legend with Head East, except this time, his mind was no longer blown on drugs and alcohol – he was clean, focused, and armed with a powerful message: Jesus Christ is alive and through Him we are to be victorious in His perfect plan for us.

And that’s how it’s been with John Schlitt ever since.  After sixteen Petra albums, four solo albums recorded, and one II Guys from Petra album, plus numerous guest vocalist appearances — John is a man who lives for the Lord and makes no bones about his faith.

While John is arguably one of the most powerful vocalists around, his mightiest cry is the cry of his heart. Whether onstage or up close and personal, John’s voice is one of a truly changed soul.  And his music is and always will be a reflection of God’s love and redeeming power.

John continues to craft his solo career with more expanding endeavors and accomplishments, including television appearances, co-hosting radio talk shows and speaking engagements. He tours throughout the world in support of his latest album, “The Greater Cause,” as well as select reunion dates with Petra.  He was recently named the best rock singer in Christian music history by GospelMusicChannel.com, which called Schlitt "one of the most distinctive and impacting men to ever stand behind a microphone."