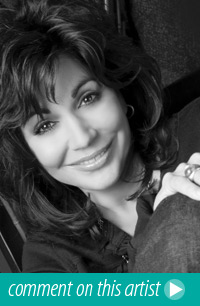 Kathy Troccoli : then and now...

Born in Brooklyn, New York, on June 24, 1958, her family moved when she was three and she was raised in Islip Terrace, Long Island, New York, graduating from East Islip High School.  At 15, she lost her father to colon cancer.  She also lost her mother to breast cancer in 1991, shortly before the release of her album Pure Attraction and its mainstream chart selection, "Everything Changes".  Before recording and releasing the album, Troccoli had taken a five-year break from the music world.

After graduation, she attended the Berklee College of Music in Boston for a year, studying jazz and opera, before returning home to attend college in the Long Island region.  While working to pay her college bill, she committed herself to Christ (1978), and her alto voice gained prominence when she opened for Ed Nalle's group GLAD in 1980 during a concert in the area.

“Kathy's initial record became the fastest selling debut album from any female artist in the history of Christian music at that time and included her first radio hit Stubborn Love.”

Nalle assisted Troccoli in her career, helping the young artist record demos which would be given to Michael Blanton and Dan Harrell (Amy Grant's brother-in-law), who formed the Reunion label to start her career in 1982 with Stubborn Love.  A second album, Heart and Soul, was released in 1984 and gave her first Grammy nomination a year later, followed by Images in 1986. Troccoli also provided backing vocal for Taylor Dayne's song "I'll Be Your Shelter" in 1989/1990.

Her initial record became the fastest selling debut album from any female artist in the history of Christian music at that time and included her first radio hit, Stubborn Love.

After her mother's death, she paired with Reunion again in 1991 with Pure Attraction, which launched her on the national charts with the single "Everything Changes," which peaked at #14 on the Billboard Hot 100. "Help Myself To You" became her first #1 hit in her ten-year career, and began a string of GMA Music Awards nominations, including numerous attempts at Female Vocalist.

In 1996, Troccoli was featured on the Beach Boys's now out-of-print album Stars and Stripes Vol. 1, singing lead vocals on a cover of their 1969 song "I Can Hear Music", itself a cover of a Phil Spector song. The Beach Boys sing on the track as well, providing harmonies and backing vocals.

Numerous hit songs came afterwards, including 1994's "My Life is in Your Hands", jointly written and composed with Bill Montvilo, which defined her career and inspired the devotional book of the same title, written in 1997, and 1995's "Go Light Your World", which began the rise of writer Chris Rice and was used for charity efforts that year.

In addition to her success in Christian music, Kathy made quite an impact in the mainstream arena as well, scoring a top five hit with Everything Changes.  She also had a top 10 single with the Beach Boys, entitled I Can Hear Music.

Kathy has come a long way since her musical debut, but her passion for sharing the Gospel and her life lessons through music has not waned a bit.  In 2012, she celebrated 30 years of music and ministry.  Kathy has 22 recordings to her credit, mixing both pop/gospel to jazz flavors on several recordings.  From the big band sound on Sentimental Christmas and unique combo arrangements on Heartsongs, to the beloved and intimate worship on Draw Me Close, Kathy displays her diverse talent–being a velvety songstress to a powerful encourager.

“So many years were spent working and reaching and climbing.  I was trying to find my place in the music world.  But God has His perfect timing and a surprisingly different road opened up for me in the last several years.  The journey has been far more exhilarating than anything I could have ever imagined.”

Kathy’s numerous accolades include these 22 recordings, 17 number-one radio hits, 19 Dove Award nominations, 2 Dove Awards, and 3 Grammy nominations.  Her newest CD, “30” Years/Songs–The Kathy Troccoli Collection is a treasured assortment of her beloved music and serves as a tribute to the timeless classics of her career.  This collection of favorites includes Stubborn Love, Go Light Your World and My Life Is In Your Hands.

A highly sought-after conference speaker and singer, Kathy has ministered to millions of women through various national conferences.  A new adventure began for Kathy in 2012 as she launched an intimate women’s event called Among Friends.  As the host, Kathy is inviting nationally known authors, speakers, humorists and Bible teachers to join her in multiple locations nationwide.  Different guests will be featured in each city and include — Lisa Harper, Liz Curtis Higgs, Chonda Pierce, Anita Renfroe, Ellie Lofaro, Carol Kent, Jennifer Rothschild, Patsy Clairmont, Donna VanLiere and many more.

This Friday evening/Saturday morning program includes bible teaching, powerful stories, comedic relief and comforting music.  There will also be a time of worship and prayer. “I can’t wait to spend time with women at Among Friends”, says Kathy.  “My hope is to give them a safe place to let down the walls, enjoy a good laugh, be themselves — and walk away with renewed courage to take on life’s trials. I yearn for all of us to leave knowing that God is not done writing our stories.”

From serving on the mission fields of Africa, India and Central America through the highly respected ministry of Life Outreach International with James and Betty Robison, to hosting 15 years of rejuvenating and relaxing cruises, meeting and ministering to women across the country is still Kathy’s greatest joy and passion.   Kathy has allowed both successes and trials to shape her over the past thirty years, equipping her for a multi-faceted career. Her arresting transparency and penetrating songs have allowed her the longevity few have had the opportunity to experience.

Kathy doesn’t ever take the success bestowed on her for granted. . “I am exactly where I am supposed to be. There is such freedom in that.  Now I truly understand that my singing is just a part of what God has created me to do.  ”And what is that?  “To encourage, motivate, and inspire – what a privilege.”

GMA Music Awards 1998 Inspirational Recorded Song, "A Baby's Prayer" (two awards, one as artist, one as writer, shared with co-write Scott Brasher). 1999 Inspirational Album of the Year, Corner of Eden.