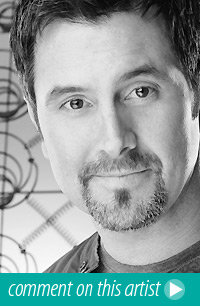 Over the past few years, Mark Harris, former member of 4him and winner of 8 Dove awards and author of 24 No. 1 hits, has been busy serving as the worship pastor in his church and working on a collection of new songs that serve as a reflection of God's work in his own life, the outpouring of which is Stronger in the Broken Places set to be released in October 2011.

"Since the end of 4him and embarking upon a solo career, Mark found himself with enough time and the opportunity to invest in those around him and to learn from others with markedly different callings in their lives."

I chose some of the most personal and purpose-filled songs that I had written, for this album, says Mark.  It is the product of a good bit of patience on my part, a lot of listening. I am excited to be able to offer it to others now, and to hear what kind of impact it will have in their lives as they take time to reflect on what God is doing in them.

Stronger in the Broken Places is the creative product of a new season in Mark Harris's life.  Since the end of 4him and embarking upon a solo career, Mark found himself with enough time and the opportunity to invest in those around him and to learn from others with markedly different callings in their lives.  Being at home, investing in my family and in the community around me, meant that I was also able to slow down long enough to hear the Lord speak some new things into my heart says Mark. After so many years on the road, I was finally able to unpack my bags, and what I found was God prodding me to be patient, to let Him take the lead in every aspect of my life.  I felt strongly that He wanted me to take my time, and that He wanted to give me new direction...so I trusted him.  I felt the Holy Spirit ushering me and my music into this new season.  He has really refreshed and reinvigorated my desire to write and my desire to touch people through music.

Because of this shift in pace and perspective, songs chosen for "Stronger in the Broken Places" looked a bit different.  After a collaborative effort of trusted listeners lived with a large collection of songs that had been written over the last 4 years, he felt the Lord proding him to have patience, to accept the discipline of making different choices lyrically and musically.  I really have had to put a great deal of trust in those around me, in the making of this record.  Mark says, " I am in a season of life where things have been changing and it is so important to simply stop and listen."

The title track and first single "Stronger in the Broken Places" came to Mark after talking with a friend about a conversation he'd had with his doctor.  Once a bone breaks in one place, most likely it will never break there again, says Mark...I just loved that idea.  We all hurt and struggle, but when you heal...you will be stronger because of what you know, so there is beauty in the suffering.  The winds of life bend us and even at times break us, but through those times God is always present. Though we may not always feel his presence, we look back after the storm, and see his purposes and plans always prevail.  When we come through those times, we are stronger than before..."Stronger in the Broken Places".

"All Things New" speaks to Marks constant desire to pursue change and to experience renewal in his own life – a theme that will resonate clearly with most listeners.  "I didn’t want to push the automatic button and do what I’d done before with this album", says Mark, ...so this song felt like a good fit for this project.  There are new places I’ve gone to lyrically and musically here – this album is wide-ranging in terms of style.

As a worship pastor, Mark has encountered the power of hand-raising praise songs and the intimacy of quiet, prayerful songs.  But worship goes beyond just the song, which is something he and Tony Wood captured in "Cold Water", a song about the necessity of worshiping God, not just in song, but in the every day moments, even when worship might be the farthest thing from your mind.  Tony brought me the lyrics to this song..I was really convicted by them.  I’ve always said that worship is how we live our lives 7 days a week, 24 hours a day, but this lyric really challenged me in new ways.  I can lead worship and be a Christian artist, but if that's all I do, I'm failing.

Bay Community, the church where Mark serves as a worship pastor, has helped shaped his new music in fundamental ways, allowing him to get up close and personal to the act of worship and being involved in the lives of people in the church. In the midst of a characteristically busy day at the office, he found a quiet moment, and in it, "Maker of the Day" came to him as a gift.  I was reading and praying, and that song came out of the stillness in the moment.  Like so much of the rest of this album, God spoke when I got quiet long enough to hear his voice.  It is amazing to me what can happen when we stay, quiet before the Lord...until we hear his voice leading.  With an honest folk feel, the song offers the simple reassurance of Gods divine rhythms, sovereignty and consistency in the midst of our hectic and often over-scheduled lives.

"Stronger in the Broken Places" showcases the breadth of Marks artistic talents as he balances quiet and touching songs with those more spirit-rallying and praise-filled.  "Heaven Sweet Forever" was written in memory of Marks father-in-law, but offers a comforting portrait of heaven for anyone grieving a loved one. "We Will Not Forget" honors and celebrates our veterans while paralleling Gods sacrifice... sending his son to die in a war of sorts on earth.   "An Offering", a song about laying down our lives before God, is sweet and honest in tone, thanks largely to Marks teenage daughter Maddison, who sings a duet with him here.

After so many years as a successful recording artist, Mark credits this time of stepping back from the studio with reviving his inspiration for his fourth solo album.  Spending time with his wife and children and serving with others in worship, have brought about change and new life within him.  After so many years of doing this, you might think I have less to write about, or that I'm less inspired, says Mark, but where I am in life actually inspires me more, and I feel like I'm writing more now than I ever have.

Mark feels an immense amount of gratitude for his career past and present, and while his calling to music is still much the same, it has been renewed by the quiet promptings of the Holy Spirit.   "Stronger in the Broken Places" is an album I felt God called me to make, and I'm excited about that, he says. I think it will really have an impact on those it's meant for.