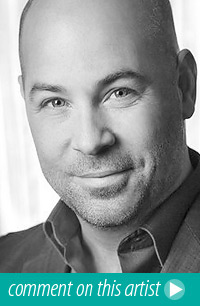 Mark Schultz : then and now...

Moving to Nashville: After graduating from college, Schultz drove to Nashville, TN to try to make it in the music industry. He had no job lined up, and all of his belongings fit in the back of his car. When he got to Nashville, he began looking for internships with music labels, and he also took a job as a waiter at one of the larger hotels in downtown Nashville. The hotel was right down the street from the famous Ryman auditorium

Almost a year later Schultz was struggling to make ends meet as a waiter and was not getting any time to write songs or perform. He was ready to return to Kansas and give up on his dream. Late one night as he was closing the restaurant a couple came in through the front door. They explained that they had been given a gift by their church members to spend a night out at the hotel and have dinner. Even though he was tired and ready to go home, Schultz began to enjoy the conversation with the couple. Immediately a friendship was born with Mark and Susan DeVries. This was the youth pastor that Schultz was supposed to call a year before. DeVries told Schultz that he should enter youth ministry because of his engaging personality. Schultz did not think he would be good at working with kids, but eventually, he agreed and started at First Presbyterian Church, Nashville, TN as a youth director. He worked there alongside Mark DeVries for eight years, and it is at FPC where his music career was born.

“As an adopted child, Schultz believes that giving to orphans in need is part of his life's purpose.”

Up With People: About a year after he started working at FPC, Schultz was offered a part in the group Up With People to travel the world performing concerts. He was allowed to go while still keeping his job at FPC secure. During that year he visited France, Italy, Germany, Switzerland, and other countries performing concerts and community service. It was a defining experience for Schultz who had never traveled outside of the country.

Career: Schultz began writing songs for the youth at First Presbyterian Church and their families. He wrote personal songs of people's struggles (He's My Son, Cloud of Witnesses, etc.) as well as songs for certain church events (Remember Me, I Am the Way). The members of the church and specifically the mothers of the youth group helped Schultz organize a concert at the Ryman auditorium which was held in 2000. Tickets were sold at FPC and all over Nashville by the women of the church. The auditorium was full that night and Schultz's parents were in the front row. Mark DeVries introduced him, and after the Ryman show, Schultz was offered a record deal with Myrrh Records. The songs performed at the Ryman concert made up Schultz's first record, his self-titled debut, Mark Schultz This virtually unheard-of feat for a new artist landed Schultz not only a record deal where he went on to sell over 1.3 million albums but also garnered him 10 No. 1 singles to date. Mark has landed the top spot on Billboard magazine’s Christian Adult Contemporary Songwriter list and has been featured on “48 Hours” “CNN” and “Extreme Makeover: Home Edition.” In 2011, Schultz released his first instrumental album, Renaissance and his first novella, titled “Letters From War,” based on his hit song through {Howard Books} a division of {Simon and Schuster}. His 2005 release, Mark Schultz Live: A Night of Stories & Songs, was certified Platinum by the R.I.A.A. and earned Schultz his first GMA Dove Award.

Mark Across America (2007): On May 6, 2007, Schultz began bicycling from California to Maine in an attempt to raise money for widows and orphans. Official Mark Across America Website. Schultz's inspiration to make the 3,500 mile trek came from a visit that he and his wife made to orphanages in Mexico. During the trip, Schultz performed concerts along the route and all of the proceeds benefitted the James Fund, a non-profit that meets the needs of orphans and widows. In total, Schultz raised approximately $250,000.

Mark Schultz Cruises: In 2010 Mark Schultz set out on the "Come Alive" cruise to Alaska with Bebo Norman, Joy Williams, Bone Hampton and Mark DeVries.Mark will set sail again in 2014 on the "All Things Possible" cruise to the Caribbean with Jaime Jamgochian, Jimmy Needham, Cindy Morgan, Sigmund Brouwer and Pastor Mike Glenn. Find out more at Inspiration Cruises.

Activism: As an adopted child, Schultz believes that giving to orphans in need is part of his life's purpose. In addition to the bike trip, he has been an advocate for orphans and adoption during his entire career. Specifically, he has been a spokesperson for Bethany Christian Services, World Vision, Compassion, Food For the Hungry, The Congressional Coalition on Adoption Institute and many others. More recently, Schultz has been participating in mission trips to serve orphans in Mexico with the group Good Goers.In 2011, Schultz and his wife started the Remember Me Mission, which is a non-profit dedicated to helping orphans all over the world. Proceeds from Schultz's music and other creative projects go toward healthcare and education for orphans at home and abroad.

Works: Albums: Mark Schultz Song Cinema Stories & Songs Broken & Beautiful Come Alive Renaissance All Things Possible Compilations: Live: A Night of Stories & Songs Broken & Beautiful: Expanded Edition The Best of Mark Schultz Singles: He's My Son I Am the Way Back in His Arms Again I Have Been There Letters From War You Are a Child of Mine He Will Carry Me I Am Broken & Beaufitul Everything To Me 40 Days He Is Love Has Come What It Means to Be Loved All Things Possible