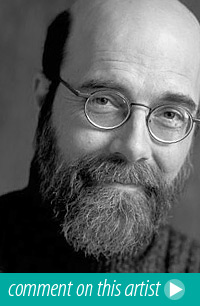 Michael Card : then and now...

Michael Card, born April 11, 1957, is an American Christian singer-songwriter, musician, author, and radio host from Franklin, Tennessee.  He is best known for his contributions in contemporary Christian music, which couple folk-style melodies and instrumentation with lyrics that stem from intensive study of the Bible. Since his debut in 1981, he has sold more than 4 million albums, and has written 19 No. 1 singles.  He has also authored several books, including Gold Medallion Book Award winner A Sacred Sorrow.

"Michael Card is best known for his contributions in contemporary Christian music, which couple folk-style melodies and instrumentation with lyrics that stem from intensive study of the Bible. Since his debut in 1981, he has sold more than 4 million albums"

Card was born in Madison, Tennessee as the son of a doctor and grandson of a Baptist minister.  He received Bachelor's and Master's degrees in Biblical Studies from Western Kentucky University, and was awarded the university's "Distinguished Alumni Award" in 1997.  His studies in physics and astronomy allowed him to support himself while a student by working for six years at a planetarium.

Card never intended to be a professional musician.  He got his start when his professor and mentor, William L. Lane, asked Card to write some music to accompany weekly sermons at their church.  His friend, musician Randy Scruggs, then asked him to record a demo tape so Scruggs could get a job as a producer.  The record label agreed to hire Scruggs as long as his first project was to produce an album featuring Card.  Since then Card has released nineteen original albums and at least six compilation albums.  Another album, Starkindler, is composed of Card's interpretations of traditional Celtic hymns.  The compilations often include one or two new songs along with previously released material.  With the exception of Starkindler, Card writes the vast majority of the music he records (although sometimes with collaborators).  Many of Card's albums are structured around a unifying theme.  For example, the songs from The Beginning are all based on the Pentateuch.  The individual songs have subjects such as Genesis, Leviticus, Abraham, Isaac and Moses. Card is particularly adept at relating difficult or obscure concepts from the Old Testament to more understandable themes from the New Testament.  For example, the song "Jubilee" talks about the period of rest and the release from debts and slavery commanded in the Jubilee year as described in Leviticus 25, but also reveals how the idea culminated in the rest and freedom from condemnation offered through Jesus.  Card's most famous song is "El Shaddai", which was recorded by Amy Grant as well as by Card himself.  Grant's recording was named No. 326 on the RIAA's list of 365 Songs of the Century in 2001.  Other popular Card songs include "Immanuel", "Joy in the Journey", and "Heal Our Land". "Heal Our Land" was commissioned as the 1993 National Day of Prayer's theme song.  Despite his success in music, Card has always maintained that his music career is secondary to his calling as a Bible teacher.  He has at times distanced himself from the CCM industry by criticizing the promotion of personalities over musical content, and the shifting emphasis away from God in order to sell more albums.  One current music project is his writing and mentoring of musicians under the ByFor.org Project.

Michael Card is the author or co-author of nineteen books.  He originally started writing as a way to share the knowledge he accumulated while researching his songs.  His studies were so in-depth that he couldn't condense everything he had learned into one short song.  The books that resulted from album research bear the same titles as the albums.  He then branched out to other subjects not specifically based on his music, such as the Gospel of John, homeschooling, and Christian discipleship and mentoring.  As of 2005, he has joined with NavPress to pursue his interest in writing Christian fiction.

In addition to touring and writing, Card also hosted a weekly radio program.  In the Studio with Michael Card was carried by stations in 48 states, Canada, and the Caribbean.  It was also available via internet streaming audio and as a podcast.  The show was an amalgam of talk, musical performances and Bible study.  The show ceased production in March, 2009.

Compilations Include: Legacy and First Light (1988) both albums reissued on a single disc. The Life (1988) contains The Final Word, Scandalon and Known by the Scars in a boxed-set (except "Crown Him (Reprise)") The Early Works (1991) The Ancient Faith (1993) contains The Beginning, The Way of Wisdom and The Word: Recapturing the Imagination in a boxed-set (plus "Heal Our Land" song for the National Day of Prayer & "Ancient Faith Overture") Joy in the Journey (1994) contains "Chorus selections from The Life trilogy Signature Songs (1999) contains selections from Legacy and First Light The Ultimate Collection (2006)