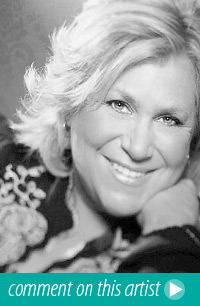 Sandra Faye "Sandi" Patty, born July 12, 1956, is an American Christian music singer. For many years she was known as Sandi Patti. She has been dubbed "The Voice" by critics because of her wide range and flexibility.

Patty was born in Oklahoma City, Oklahoma, into a family of musicians; her father was a minister of music and her mother served as the church pianist. She first performed at the age of two when she sang "Jesus Loves Me" for her church, Phoenix First Church of God (Anderson, Indiana). First growing up in Phoenix, then San Diego, she and her brothers joined her parents in a performing group, known as "The Ron Patty Family," and sang at churches across the nation during summer holidays. After high school graduation from Crawford High in San Diego, CA, she attended San Diego State University and Anderson University in Anderson, Indiana, where she studied voice and conducting. While studying at Anderson University, she worked as a studio musician for area recording studios, singing background vocals and recording commercial jingles, including one for Juicy Fruit gum. Her reputation as a performer and studio singer grew during the late 1970s, and it was during this time that she initiated contact with legendary Christian musician, Bill Gaither.

“As one of the most highly acclaimed performers of our time with five Grammy® awards, four Billboard Music Awards, three platinum records, five gold records, and eleven million units sold, Sandi Patty is simply known as The Voice.

Patty recorded her first album, For My Friends, an independent effort, that landed in the hands of executives at Singspiration! records. In 1979, she was signed to Singspiration! and released her first professional record, Sandi's Song. According to the FAQ section on her website, the name on her birth certificate is Sandra Patty.[2] A printer's error on the labeling listed her name as Sandi Patti, and she used this moniker as her stage name for the next fifteen years, before correcting it to Sandi Patty.Her career expanded after she won her first two GMA Dove Awards in 1982, and began singing backup for Bill Gaither and the Bill Gaither Trio. She headlined her first national tour in 1984, and reached national acclaim after her rendition of "The Star-Spangled Banner" was included during the ABC Statue of Liberty re-dedication broadcast on July 4, 1986. This exposure led to multiple mainstream television appearances including The Tonight Show, Christmas in Washington, and Walt Disney's Fourth of July Extravaganza. She was invited to sing the national anthem at the Indianapolis 500 from 1987–1988 and 1990–1992.At the peak of her career, her concerts were so heavily attended that she performed in often sold-out mainstream arenas and concert halls. In the late 1980s and early 1990s, she averaged over 200 concerts a year, and supported a staff of over 30 that managed her career. In 1995, she was also featured in the Warren Chaney docudrama, America: A Call to Greatness.[3] During this period of time she was noted, often critically, as the highest-paid singer in the Christian music industry, largely due to massive touring and high-profile public appearances.

Patty slowly rebuilt her career by expanding her musical appeal which included pop concert performances with symphony orchestras including the Atlanta Symphony Orchestra, the Cincinnati Pops, and the Dallas Symphony as well as serving for many years as the master of ceremonies for the Yuletide Celebration with the Indianapolis Symphony Orchestra.In both interviews and in her autobiography, Broken on the Back Row, Patty expressed remorse and took full responsibility for her past actions and revealed the steps she took in seeking the forgiveness from those that her actions most affected.  In 2000, she had a guest singing appearance at the end of a 7th heaven episode (season four, episode 20). She appeared in the 2006 annual Macy's Thanksgiving Day Parade in New York. A televised performance of Sandi Patty's Yuletide Special was filmed for syndication in 2006, with other performers—including the Mormon Tabernacle Choir and the U.S. Air Force Reserve Band.  In 2004, Patty was inducted into the Gospel Music Hall of Fame and in 2007 was awarded the GMA Music in the Rockies Summit Award.In May 2008, Patty released her 30th studio recording, Songs For The Journey, in which she covers classic hymns of the church and other modern gospel classics. 2008 also saw the release of five separate compilation recordings of past songs taken from previous albums.In 2009, Patty received two GMA Dove Award nominations: Female Vocalist Of The Year, and Inspirational Album Of The Year (Songs For The Journey).Simply Sandi, an acoustic album, is the first solo project to be released on her own record label, Stylos Records (a label with three artists—Sandi, Ben Utecht, and Heather Payne).  It was released on May 5, 2009.  This album includes new renditions of some of Sandi's most beloved songs including "In Heaven's Eyes", "Via Dolorosa" and "The Stage is Bare". WEA Distribution is the distributor for Stylos Records, although this album is not being released commercially.  In Fall 2009, Sandi released her first live Christmas album entitled Christmas: LIVE.   The album includes live performances of her past Christmas favorites including "O Holy Night", "Someday", and a duet with her husband Don Peslis in "The Prayer".

In Fall 2010, The Edge of the Divine was released. The album featured a new version of her popular song "We Shall Behold Him", plus eight new songs with a fresh contemporary sound—one of which she performs with Heather Payne.  A book of the same name was also released—with the sub-title "Where Possibility Meets God's Faithfulness."  In October 2011, Patty released Broadway Stories, a secular album.  From iTunes Review: "Before Sandi Patty was a Christian music star, she developed her craft by performing stage standards and pop tunes from the Great American Songbook.  Broadway Stories reaffirms her mastery of such material against gorgeous backdrops provided by the 64-piece Prague Symphony Orchestra. From the first track to the last, Patty shows an easy command of the Broadway idiom, applying her formidable pipes to material worthy of her talents."  In January, 2012, Sandi starred as Dolly Levi in the Indianapolis Symphony Orchestra's world premiere concert stage version of the Broadway musical, "Hello, Dolly!" to rave reviews.

Sandi Patty is known for her wide vocal range, flexibility, and emotional expression.  In her early recordings, she created a trademark for herself by exploiting her range to its fullest advantage, through the "power ballad" vehicle, sweeping orchestral gestures, and a series of key modulations building to a crescendo and signature high vocal ending.  This style, often defined as being in the "inspirational" genre of Christian music, flourished throughout the 1980s.  In later years, Patty's versatility has allowed her to expand into other styles, such as black gospel, southern gospel, classic and modern pop, and American musical theater.  On her official website, she discusses her range saying "To be honest, my range has changed a bit over the years, but my mom says it’s about four octaves (F below middle C to high F above double high C).  Really singing high is just like screaming on pitch."

In 2009, she and her family relocated from Anderson, IN, to Oklahoma City, OK.  She and her husband, Don Peslis, have a blended family consisting of eight children.