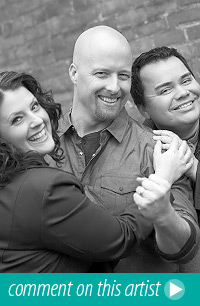 Selah is a contemporary Christian vocal trio consisting of Todd Smith, Allan Hall, and Amy Perry. They have won five Gospel Music Association Dove Awards. The group has been featured on The 700 Club, The Hour of Power, and TBN.

“Selah has earned a reputation for being able to reveal the heart of any song they recorded, transforming old Christian hymns into a more modern style and with their powerful voices and beautiful harmonies.”

Original lineup (1997–2004)...Selah was originally formed by brother and sister, Todd and Nicol Smith, along with friend Allan Hall.  The group quickly gained success with the release of their first album, Be Still My Soul, in 1999. They quickly earned a reputation for being able to reveal the heart of any song they recorded, transforming old Christian hymns into a more modern style and with their powerful voices and beautiful harmonies  Todd and Nicol, who spent their childhood in Subsaharan Africa, brought many African elements to their songs as well. They are as comfortable singing in Kituba, as they are in English.  Todd gives credit for his music career to his missionary upbringing.  “I've been singing in front of people since I was three,” he said. “My parents are missionaries.  When we came back to the United States, we had to visit each church that sponsored us. That was a good training ground.”  They also did well-known covers of already-famous songs such as "You Raise Me Up" by Secret Garden and "Bless the Broken Road" by Marcus Hummon.  Selah went on to win a Dove Award for their debut album.

Their second album Press On was released in 2001, and also won a Dove Award, along with many nominations for individual songs in the album.

On April 2000, Nicol Smith released her self-titled solo debut on Curb Records.  She met and married Greg Sponberg in 2003.  Nicol Sponberg released her second solo album, Resurrection (Curb Records), in 2004.  The single "Crazy In Love" crossed over to the secular Adult Contemporary charts, while songs like "Safe" continued to earn her airplay on Christian radio.  Todd also produced a solo album, Alive, in 2004.

Nicol left the group in 2004 to pursue a solo career, and for most of 2005, Melodie Crittenden sang with the group.  The 2006 Bless the Broken Road album was a project that teamed original Selah members Allan Hall and Todd Smith with a wide variety of guest singers.  After auditioning 15 female vocalists, Amy Perry became a full-time member based on her vocal abilities and spirituality.  Allan Hall also began to get a more active singing role, from originally being the band's accompanist.

Todd Smith and his family have found restoration and hope in God’s promise following the loss of his daughter, Audrey, after only two hours of life.  “Every April 7th is a difficult day,” the lead singer vulnerably admits.  “We don’t know whether to celebrate or mourn, so we do both.

”Rather than diminish his faith, Smith’s family tragedy further established his conviction in a God who knows everything, sees everything and will work through anything – a promise heard in the title cut’s worshipful balladry.  Penned by the popular worship writers, Carl Cartee and Jennie Lee Riddle (“Revelation Song”), the lyric encompasses Todd’s present journey perfectly.

Adding a healthy baby girl, Charlotte, to the Smith family earlier this year, Todd is reveling in the joy of parenting his four young girls.  Wanting to snapshot these treasured times, he sat down with fellow father and former FFH member, Michael Boggs, to write “Moments Like These,” a tender acoustic tribute to the ladies in his life.  “I wanted to remind myself to slow down and enjoy who my kids are,” the proud papa shares.  “Many times I say ‘Not now.’  But this is a prayer for me to make the most of this incredible time God has given me with my girls.  I hope it makes other dads stop and think about their relationship with their kids.  And if there is anything they need to fix or address, I hope they will be humble enough to set things straight and enjoy the children God entrusted to them.”

Allan quotes:  “This life is not my own / I was bought when love was slain / What high cost to pay death’s wage / Now ransomed I am freedom’s slave . . .” (from “When Love was Slain”)

When Allan Hall turned forty last year, his weight was at an all-time high, hindering his ability to minister effectively on the road. “I wasn’t surrendering my health to God and it was visible,” Hall confesses, recognizing the battle was not strictly physical, but also spiritual. “While I was telling the audience that God cares deeply about every aspect of their lives, I was not caring for myself and my ministry was compromised.

”Heeding the wake up call of his disposition, the veteran musician decided to keep the pounds in check.  Having shed fifty pounds so far – half of his total goal – Allan says he feels “a bigger responsibility to ‘steward’ my body.  After all, the body is the Temple, and my ‘temple’ was in massive disrepair!” Furthermore, he expresses, “I want to inspire folks that change is possible, and I need to be a living example of that.

”Speaking of inspiration, the Hope album gives tribute to Allan’s greatest musical mentor, Dolly Parton, by covering her beloved hit, “Coat of Many Colors.”  “I feel a deep connection with Dolly because she moved to Nashville at eighteen chasing a dream that God had put in her heart.  I did the same thing,” Allan relates. “As Hope was taking shape with ‘rootsy-er’ elements, the song seemed very natural to record.

”So natural was Allan’s interpretation of Parton’s classic that the singing legend wrote Hall an effusive letter of praise after hearing a rough mix of Selah’s version. “I was so humbled,” Hall says with obvious excitement.  “It’s a great feeling to know the creator of a song loved your interpretation of their creation!

”Parton’s song is only one example of Hope’s southern aspects. T he “swampy blues” electric guitar of Buddy Miller’s “Shelter Me,” a song of God’s protection, and the exquisite slow-rolling banjo on the stark surrender of “When Love Was Slain,” successfully incorporate Americana components previously untapped by the inspirational threesome.  “Coming from East Tennessee, I’ve always loved roots music,” Allan explains. “Some of these songs lent themselves to a more stripped-down approach, really allowing the story and lyrics to shine through.  Hope has a lighter feel than previous albums. I think that reflects the joyful places that we are finding ourselves in these days.”

Around the time Allan was considering the consequences of his health, Amy Perry and her husband began to consider a family.  But there was one obstacle: Amy’s weight. “I looked at the health issues I was having and difficulty of traveling, and realized if I got pregnant I would end up over 300 pounds.

”So for the first time in a lifelong battle with her body, Amy asked God for help. “I know He doesn’t care what number I weigh.  But He greatly cares that I submit every area of life to Him,” the powerhouse singer states.  “And I hadn’t done that with food.” A divine reconnection with an old friend, who is a nutritionist and personal trainer with a spiritual foundation, gave Amy the motivation and accountability she needed to make a drastic change.

With the new found freedom of losing eighty-five pounds, Amy finally felt released to start a family.   She and her husband Jake are expecting their first child in early 2012.  Perry now has a platform to aid those fighting similar battles. “I have experienced a liberty in ministry that I’ve never seen before,” she says. “I’ve been through some stuff that hurt me and left me feeling worthless.  If sharing that helps someone realize they are beautiful and of value, then I’ll share it forever.

”With Hope of the Broken World, Selah recognizes their opportunity to relate with and help listeners heal through songs that poignantly contrast worldly hurt with spiritual hope.  “We don’t know what people need when they put in a Selah CD, or when they come to a concert,” Amy humbly discloses.  “We just want God to use us.” Allan agrees.  “We have always wanted to comfort hurting souls.  I wear it as a badge of honor that our fans are broken people who say our music speaks to them because we don’t shy away from loss or suffering.”