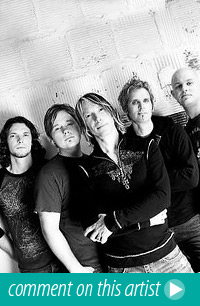 SONICFLOOd : then and now...

A DECADE OF PRAISE — SONICFLOOd, the band that paved the way for the modern praise and worship movement and touted as “The Fathers of Modern Worship Music” is celebrating 10 years of ministry. In the 10 years that SONICFLOOd has been ministering through praise and worship, they have seen great and tremendous advancements for the kingdom of God. One of their greatest honors was to perform the first Christian concert ever in a secular venue in modern Turkey’s history. This was nothing short of a miracle in a Country that is 99.9% Muslim.

"A DECADE OF PRAISE — SONICFLOOd, the band that paved the way for the modern praise and worship movement and touted as “The Fathers of Modern Worship Music"

They have also had the privilege of performing at the President of Thailand’s birthday party. Their international ministry is extensive as they have performed on every continent except Antarctica. They have touched the lives of Orphans in Thailand, the Shanty Towns of South Africa, the prisoners in the Bahamas, and our brave men and women serving in our military around the world. Their commitment to the world is ever present as they produced a groundbreaking media production 56-city tour with the International Mission Board. While the band’s international ministry is vast, their influence and involvement here in America is equally as impressive.

They were recently asked to minister in Geneva, Alabama after the tragic mass shooting spree that killed 11 people. They have ministered with Promise Keepers, Franklin Graham, Josh McDowell, Morris Cerullo, Robert Schuller, Luis Pulau , Rod Parsley, and Acquire the Fire, just to name a few. They had the distinct honor of being asked to play at the 2008 Republican National Convention Prayer Breakfast, and lead singer, Rick Heil and his wife were appointed Americans of Faith Coalition Chairmen. In their 10 years of ministry they have helped facilitate over 10,000 child sponsorships and counting.

They have earned a Grammy nomination, Dove Awards, ASCAP awards, as well as many other accolades. They have been featured on the 700 Club, TBN, INSP, God TV, and Harvest TV. They have sold over 2 million records and are currently touring in promotion of their new album “A Heart Like Yours”, which Christian Music Planet says “proves Sonicflood is still the cream of the crop.” They are working on their first Christmas album which is due out this fall. All in all, over the last decade Sonicflood has tirelessly labored in the mission field to live up to their title “The Fathers of Modern Worship Music!” and have changed the face of worship music forever.