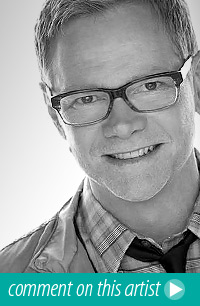 Steven Curtis Chapman : then and now...

When it comes to Christmas, Steven Curtis Chapman might as well be eight-years-old all over again. Usually wearing his favorite Charlie Brown t-shirt and perpetually ready to launch into one of his favorite tunes, Chapman has never outgrown the wonder of the season each year as the world celebrates the birth of our Savior. That childlike faith and hopeful sense of expectancy reverberate throughout his new Christmas collection, simply and aptly titled Joy.


“We have our grandbaby and it is absolutely amazing. I’m sure that’s where a lot of the inspiration is coming from for some of the new songs and new music.... It’s the season for a lot of new beginnings.”

"After recording re:creation, I wasn't quite sure what next step to take in my creative journey. I started exploring the idea of writing and arranging some new Christmas music. I have to admit I was kind of surprised by the joy that began to surface in the process, considering the journey my family has been on these past 4 1/2 years. I think that I just started remembering my childhood and then really celebrating my family. Even as hard as things have been, and as bittersweet as it relates to things like celebrations and holidays, we have begun to experience that the sweet is starting to trump the bitter for us more and more each year,” says Chapman, referencing the tragic death of five-year old daughter Maria Sue in 2008. “Christmas is becoming a less hard thing for us each year. It’s not that it’s easier to get through because we are forgetting. It’s like we can remember now without it just being so painful and the memories can be sweet.

As Chapman entered a new creative season, he felt inspired to write original Christmas music and began working with friend and producer Brent Milligan to craft a new holiday collection. The bar was already set pretty high. After all, Chapman has won an unprecedented 57 Dove Awards, five GRAMMYs and numerous other accolades, and Christmas music has always been a vital part of Chapman’s distinguished discography. His first holiday album, 1995’s The Music of Christmas featured the hit “Christmas is All in the Heart,” which has become a perennial fan favorite. There was also a special top-selling Christmas collection released exclusively through Hallmark stores. Then in 2005, he released All I Really Want for Christmas, which included such classics as “Silver Bells” and “O Little Town of Bethlehem” as well as the delightful “Shaoey and Her Dad Wish You a Merry Christmas” featuring daughter Shaohanah.

“When I started writing these new songs I was really excited,” he says of his first album for Provident Music Group.  “I’ve written a couple songs on this Christmas record that sound like they could have come off a Nat King Cole record or an Andy Williams album. They sound like the old stuff that I love. One of my favorite Christmas songs is Nat King Cole’s “The Christmas Song.”’  I just love that song and I love the Charlie Brown Christmas record.” Joy features six new songs and seven classics. One of the vintage sounding tracks that harkens back to those 50’s feeling albums is the debut single to radio, “Christmas Time Again.”

Among the other new songs is “Christmas in Kentucky,” a song that began as a heartfelt homage to Chapman’s rural roots and grew into something even more profound. “I used to stand at the window of my house on Christmas Eve and wait to see headlights come up our driveway because it meant that my Uncle Barry and Aunt Donna were coming and they always brought a lot of presents and they usually brought my grandmother,” Chapman recalls with a smile. “I’d see those headlights turn up the driveway and I would just start jumping up and down, yelling ‘They’re here! They’re here!’

“I have that great memory, so I wrote the song starting in that place.”  Then the song began to evolve and Chapman’s creative vision expanded. “The chorus of the song says, ‘It’s Christmas in Kentucky. It’s Christmas in LA. In the desperate streets of India, in the African plains, listen and you’ll hear the angels heralding the news. Glory to God in the highest and on this Earth. God is with us wherever we are, everywhere it’s Christmas.’

“While it’s Christmas in my little hometown, Paducah, K, the amazing thing is that the truth of what Christmas is about, and what we’re celebrating is all over the world. Anywhere that anybody is acknowledging that God has come and given us the gift is why we are celebrating Christmas.”

One of the most personal tunes on the new album is a song Chapman wrote for his wife Mary Beth that gives him a chance to croon like Frank Sinatra or Harry Connick Jr. “‘Christmas Kiss’ says ‘your kiss is all I’m asking for this Christmas.’ It’s real romantic,” Chapman says of the tune that evokes a Nat King Cole classic. “It’s a sweet song. Every year we turn the lights down low and put on the music and dance. It signals the beginning of Christmas. We can’t do it ‘til the day after Thanksgiving, but we put on the Nat King Cole Christmas song and as soon as that starts, I’ll take her and we’ll sway back and forth, just slow dance around the living room and then it’s like, ‘Alright Christmas can now officially start. This is the beginning of it,’ so this song was my way to express that.”

Even though Christmas is a time of joy, it can also be a difficult time for those who are missing a loved one, struggling financially or facing another kind of challenge. As he thought of those who might be hurting during the holidays, Steven penned the poignant “Christmas Card.” “I literally had tears in my eyes thinking about how many people are just hurting,” Chapman says. “I wanted to write something for those people. I wish I could just send them a Christmas card and say, ‘Somebody loves you.’ It’s the whole meaning of Christmas. The whole reason we celebrate it is because God has come to be with us and say, ‘You are not alone. I’m with you in this troubled world that we live in.’ For me and my family, Christmas has become so much more significant because it represents everything about the hope that we have and that God really has come. He really has come to be with us in our pain and in our grief and wherever we are. That theme runs through a lot of the songs, but especially this one in particular. Hopefully it will encourage people.”

Recording Joy also gave Chapman a chance to record some of his longtime favorites, among them “Joy to the World,” “We Three Kings,” “What Child Is This” and “Christmas Time is Here,” the beloved song from the animated classic “A Charlie Brown Christmas.”  “I've always loved that!  I love Snoopy!  I love ‘A Charlie Brown Christmas' and have always wanted to do that song,” Chapman enthuses,” so I did a version it, just me and a guitar.  It’s really intimate.  It sounds like I’m sitting around a fire singing it.”

In recording the album, Chapman, Milligan and some of Nashville’s finest musicians traveled to a studio in Lexington, Ky. to get away from the hustle and bustle of Nashville and focus on creating the right holiday vibe. “I dug the Christmas tree out and we took that up with us.
We took Christmas lights and strung them around the studio, but my biggest form of inspiration was wearing one of my favorite Charlie Brown Christmas t-shirts,” Chapman says, proudly noting that the collection started with one shirt he would wash and wear over and over again. The collection has now grown to about 10 shirts, mostly gifts from his mother-in-law.

“I have red, green, blue, white and grey shirts and every day, from Thanksgiving through Christmas, I wear one of my Charlie Brown Christmas t-shirts,” he says with a laugh. “They all have a little different scene on the front of them. They’re decorating the tree. They’re making snowballs or sledding and they’re just awesome! I love them. I took them with me to the studio so I got to wear them two times this year, which I’m very excited about. I wore them every day I was in the studio to provide the proper inspiration.”

For Chapman, the greatest sources of inspiration are his faith and his family. The songs he’s written about his life and loved ones have provided a soundtrack for other believers for more than two decades, and it seems as though he’s most excited about the chapters ahead. “I’m a grandpa,” he says proudly, noting that eldest daughter Emily’s little girl will be turning one in November. “We have our grandbaby and it is absolutely amazing. I’m sure that’s where a lot of the inspiration is coming from for some of the new songs and new music. It’s new life and new beginnings. It’s the season for a lot of new beginnings.”