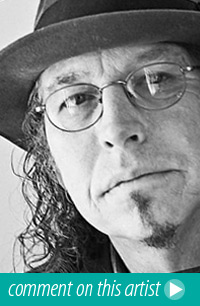 Terry Scott Taylor : then and now...

Terry Scott Taylor (born May 24, 1950) is an American songwriter, record producer, writer and founding member of the bands Daniel Amos and The Swirling Eddies (credited as Camarillo Eddy). Taylor is also a member of the roots and alternative music group, Lost Dogs. He is currently based in San Jose, California, USA.

Taylor is highly regarded for his songwriting skills. These often include allusions to and reworkings of material ranging from Elizabethan poets to modern authors. Foremost among Taylor's influences is William Blake. The Daniel Amos album title Fearful Symmetry was drawn from Blake's poem "The Tyger," and numerous songs across The Alarma! Chronicles series of albums have Blake-inspired references. Some other poets who have influenced Taylor's work are T. S. Eliot and Christina Rossetti. Eliot's poetry inspired the song "Hollow Man" from the Doppelgänger album. "Where Dreams Come True" from Taylor's solo LP A Briefing for the Ascent draws heavily from Rosetti's poem "Echo."

“During the 1990s and into the new millennium, Taylor's songwriting for the Lost Dogs and on other projects turned away from more esoteric themes.”

The inspiration for many Daniel Amos and Taylor songs from the mid-1980s can be found in the book Behold, This Dreamer: Of Reverie, Night, Sleep, Dream, Love-Dreams, Nightmare, Death. This book, compiled by Walter de la Mare and published in 1939, contains poems and essays that appear in Taylor's songwriting. De la Mare is thanked in the liner notes of the final installment of The Alarma! Chronicles, Fearful Symmetry. References to contemporary authors also appear in Taylor's songs. One example is the song "Shape of Air" from the LP Darn Floor-Big Bite. The song explores the mystical musings of Annie Dillard found in her Pulitzer prize-winning book, Pilgrim at Tinker Creek. The album is also heavily inspired by the works of Czesław Miłosz. This is especially evident in songs like "The Unattainable Earth" (which was named after one of Miłosz' books), "Safety Net", "Pictures of the Gone World", "Divine Instant", and "Half Light, Epoch, and Phase". On Taylor's 1998 release, John Wayne he credits more influences; Flannery O'Connor, Dennis Prager and Frederick Buechner.

During the 1990s and into the new millennium, Taylor's songwriting for the Lost Dogs and on other projects turned away from more esoteric themes. The songs crafted during this phase of Taylor's career marked a shift toward "Americana" and, in some ways, a return to the country music sound of Daniel Amos in the early 1970s. The primary vehicle for this phase of Taylor's songwriting career is the Lost Dogs, with a number of noteworthy solo projects. The Lost Dogs began in 1991 as a one-time collaboration between vocalists and songwriters from four different bands at the behest of their label at that time. Taylor, Gene Eugene (of Adam Again), Derri Daugherty (of The Choir), and Michael Roe (of The 77s) have released several eclectic albums of traditional American music (country, folk, blues, rock) over the last decade.