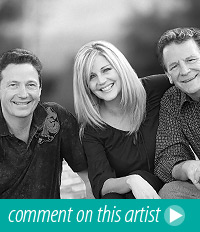 The Archers were one of America's earliest Contemporary Christian music groups. They were originally brothers Tim and Steve Archer, Nancye Short and Billy Rush Masters. After Masters and Short departed in 1977, sister Janice Archer joined. They enjoyed greater longevity than most of the pioneering CCM artists, recording chart hits in the decades of the 1970s, '80s, and '90s.

“The Archers were one of America's earliest Contemporary Christian music groups..Their hits included, ‘Jesus Is The Answer’, ‘Little Flowers’, ‘It Wouldn't Be Enough’, ‘Fresh Surrender’, ‘Stand Up!’, and ‘Heaven In Your Eyes’”

[1] Their hits included, "Jesus Is The Answer", "Little Flowers", "It Wouldn't Be Enough",[2] "Fresh Surrender", "Stand Up!", and "Heaven In Your Eyes".[3] Former Maranatha! Music artist and CCM pioneer Erick Nelson defined The Archers' role in the development of contemporary Christian music as representing one-half of a convergence: traditional vocal groups like The Archers got hipper while the hippie rock groups (like the Maranatha bands) got more mellow—eventually both evinced the polished, commercial sound that would be identified as stereotypical contemporary Christian music.

Today the family is back together, ready to share stories of their life's journeys through both testimony and song. Being part of the Jesus movement, they are hopeful that once again the move of the Holy Spirit will become prevalent in the church. There is so much to share and they are ready to do just that."